Dark Phoenix takes the X-Men…err…X-People out with a bang (that’s actually an inside joke you’ll appreciate after you see the movie).

I’m not sure why people seem to be hating on this film so much.  To try to get to the bottom of it, this particular review contains some minor spoilers that I’m not sure why were even kept secret.

First off as a disclaimer, Jean Grey, and by extension the Phoenix, is one of my favorite X-Men characters of all time (and maybe Marvel in general), right up there with Scarlet Witch, Storm, and Charles Xavier so I may be a little biased.  What can I say?  There’s something about unbridled power that gets my attention.  When I saw X-Men: The Last Stand back in 2006 I was made livid by the portrayal of this amazing character.  I hated it so much that it remains one of my least favorite movies in the series’ 20-year saga, even more than those awful stand-alone Wolverine movies that were technically much, much worse (I’m talking about you, X-Men Origins: Wolverine).  Because of my prior cinematic trauma, I remained optimistically cautious about seeing Dark Phoenix, but came out loving it.

The thing is, I’m the only person who did.

My husband, who liked parts of the movie, commented he was so bored at one point that he almost left (and to be clear, this is a man who will defend any movie, up to and including crap-fests like Alita Battle Angel and Mortal Engines, not to mention who sat through all the Michael Bay Transformers movies with me without complaining).

I’ve also since seen that Dark Phoenix is one of (if not the) lowest rated movies in the X-Men franchise.

I think for me the unravelling came from the choice of villains (and here’s where the minor spoilers come in).  Jessica Chastain was great but played the part of an inexplicably powerful alien who wanted to harness the power of the Phoenix to rebuild her home world after the Phoenix destroyed it.  She and her gang of “bad hombre” refugees (…sigh…) come to earth and try to influence/manipulate Jean, who is overwhelmed by the power, to either help them, or better yet, give it to them.  The thing is, if their race could harness the Phoenix in the first place, then how did it destroy them?  The bottom line is that the introduction of aliens in a 20-year franchise that has never mentioned them before is a bizarre choice (I know, they’re in the comics, but we’re talking about world building in the context of the movies).  If they needed an indestructible foe to go head to head with Jean, then why not just make Jessica Chastain some Wolverine-esque mutant under government control?  Or, better yet, use her as Emma Frost and the Hellfire Club, which this group sort of resembled anyway?  The use of aliens was just weird and unnecessary; plus it took unnecessary screen time to explain which may have led to the above-referenced boredom.

But that, aside from some other odd character paths (am I missing something?  was Mystique ever a full-blown X-Man?) was my only real criticism.

For the first time ever, I think this movie sufficiently explained the anger Jean (and the other X-Men to varying degrees) had toward Charles while still doing a good job expressing his perspective/vision.  Also, most importantly in my book, this movie was by far the best at showing me awesome mutant powers in full display.  I saw a Storm that wielded wind, ice, lightning and rain like she was a video game character.  I finally saw a Cyclops that wasn’t useless.  I saw a Beast who really let go (although they sort of Bruce Bannered him—I don’t remember him being able to transform before and that was an issue).  I saw a Night Crawler who thought outside the box.  And, most importantly, I saw a Jean Grey who nobody should have ever f’ed with for any number of reasons.  Dark Phoenix was a veritable parade of mutant awesomeness, and for that I genuinely appreciated this movie.

The other thing I enjoyed was that we got to see the X-Men in their prime, celebrated as heroes in bigger-than-life Umbrella Academy style.  It was everything I loved about the 90s cartoon in a live action movie.

Last, but not least, Sophie Turner’s Jean Grey was, in my opinion, nothing short of amazing.  The smile on her face as she atomized her enemies was just as good as the tears she cried when she realized what she was doing.  Don’t get me wrong, I loved Famke Janssen, but I think because Turner is portraying a younger version of Jean we get to see more vulnerability and that’s important when you’re dealing with an all-powerful cosmic entity driven only by the desire to create/destroy.    Whereas Janssen’s Jean was all passion, Turner’s is all power: when Janssen’s Jean seemed enraged at her attackers, Turner looked amused and I loved it.

Was this the best X-Men movie?  Maybe not, but I do think it was a fitting and worthy end before the team exchanges their spandex for embroidered mouse ears and gets folded into whatever mind-blowing plan Disney/Marvel has for them next. 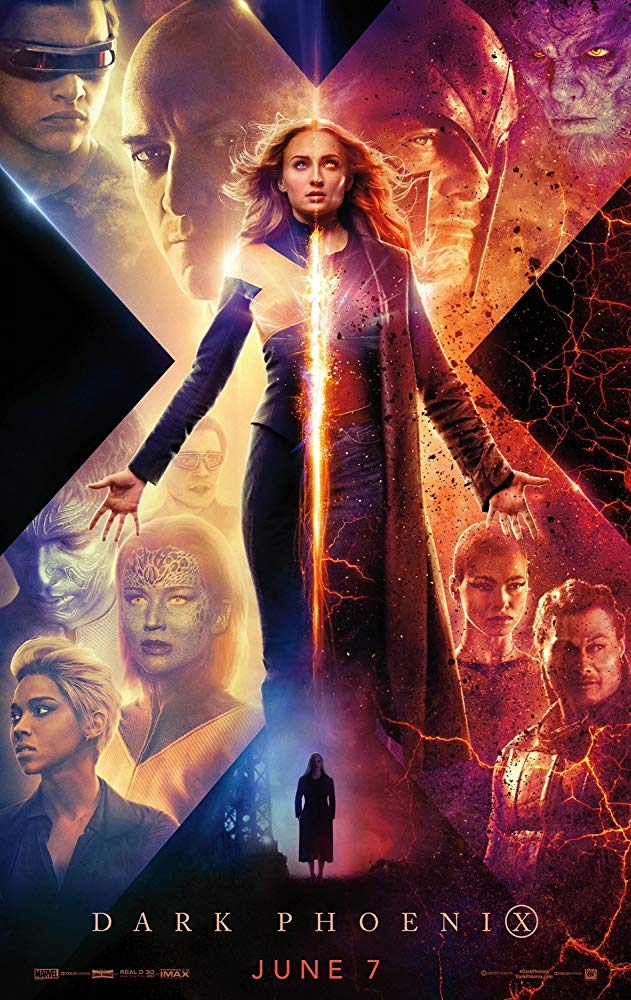